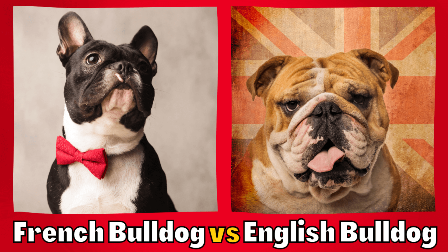 If you are thinking about welcoming a bulldog to your family, you will be confused between the two popular breeds; French bulldog and English bulldog.

Yes, they may have similar names, but the two dog breeds are very different – both in appearance and their quirks. And if you are considering getting one for your home, you should know what sets them apart to determine if they are the perfect match for you.

Luckily, you are in the right place. In this guide, we will look at the differences and similarities between the two dog breeds to determine which breed of dog is the right pet for you. So without further ado, let’s dive into the world of bulldogs. 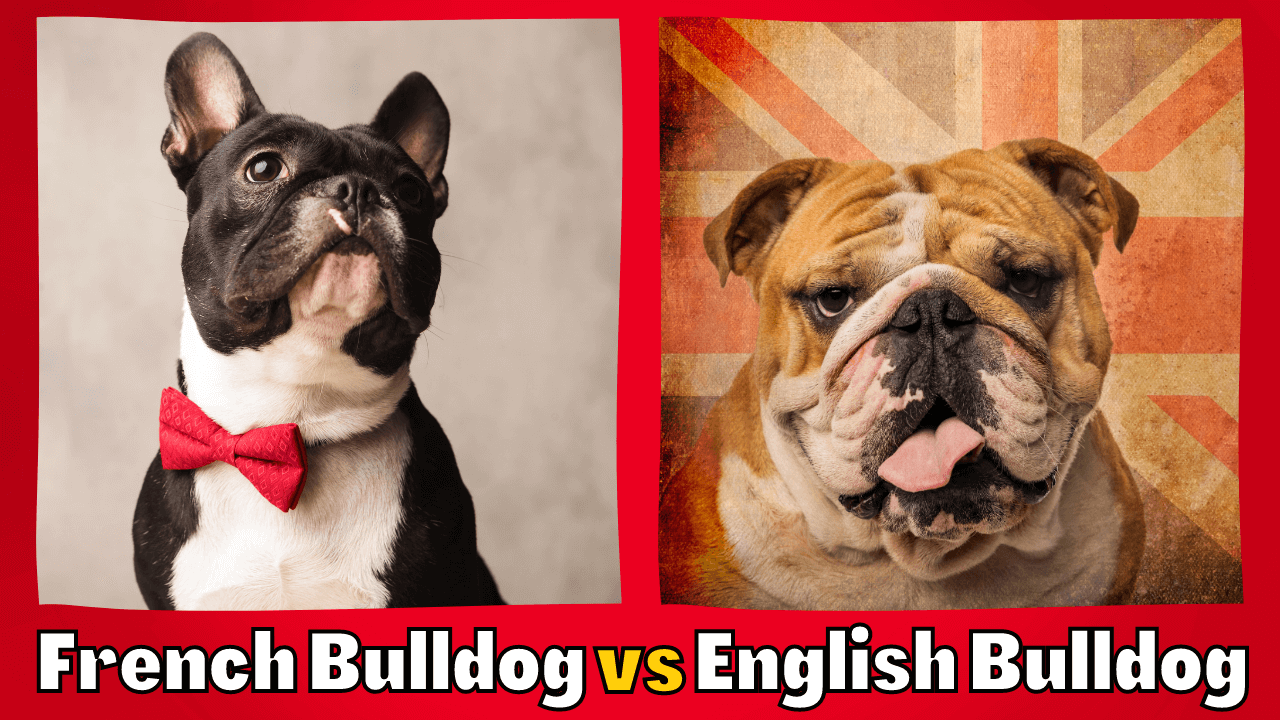 History of the English Bulldog

The English bulldog didn’t start as the lovable pets they are known today. As the name implies, their history originates from England, where they were created in the 13th century for bullfighting’s blood sport. Once that ended in the 1800s, the English bulldog transformed into affectionate family dogs.

History of the French Bulldog

Similar to the English, the French bulldog breed was also initiated in England during the 1800s. The miniature dogs immediately became popular in the French countryside.

They also became a fixture on the city sides within some time, including Paris, and are truly the city dogs that we love today.

The most prominent difference between the two breeds of dog is their size. The French bulldog breed is a small breed of dog. They measure around 11 – 13 inches tall with weight usually less than 28 pounds once fully grown.

On the other hand, the English bulldog boasts classic bulldog features, including a big head, stocky body, and wide stance. In contrast, the French bulldog is shorter and timid looking.

But despite the major size difference, the two breeds do resemble in their appearance. They both have short noses, square heads, and wrinkly skin that sets them apart from other dog breeds. However, English bulldogs have more wrinkles than their counterparts.

When it comes to coats, both the breeds have short coats that are smooth and glossy. The colors vary from white to fawn and even red. But you will never see a bulldog the color of solid black.

The dogs are both fairly low maintenance. They are easy to take care of and require minimal effort when it comes to grooming. However, if you are looking for very less maintenance, the French bulldog is a safer bet.

This is because they are low shedding dogs and can go away with once a week brushing easily. In comparison, the English bulldog sheds a little more than its counterparts, and to keep his coat shiny and manageable – you will need to brush him at least two to three times a week.

Moreover, the wrinkles that appear on both the breeds require some maintenance from your side. To keep them clean and dry, you must wipe between the folds. This can be a tedious job for English bulldog owners as they are a bit more wrinkly.

Even though both dog breed belonging to the bully category, they are naturally friendly and love playing with their owners.

Still, there are some temperament issues you should be aware of before bringing one home.

The English bulldog is generally loyal and happy dogs, but they have a stubborn streak that comes out if they are not properly trained. Thankfully, the breed is easy to train and only requires some effort from the owners.

Experts also recommend the English bulldogs as highly trainable and say that they can pick up whatever is taught to them in just a few sessions.

On the other hand, French bulldogs are more playful and happy-go-lucky than their English counterparts. However, they may not be the best pals for little children as they can be quite aggressive and like to play rough – something that can be harmful to the little ones.

They are also stubborn. But they also aim to please, and constant training can give good results.

In comparison, English bulldogs are friendlier and will befriend the entire family very fast. On the other hand, the French bulldog is a little shy and may take time to become friendly with the pack unless exposed to them from a very young age.

This means that you should socialize them early and make them part of your family from a young age if you want them to become one of the pack.

Once they become part of your family, the English bulldog and the Frenchies will not leave their owners alone. They will follow you like a shadow and will guard you for the rest of their life. They also like to be the center of attention, and being alone will result in separation anxiety.

Separation can also lead to troubling behavior such as chewing on home items and excessive barking. The behavior prolongs until someone part of the family comes back home and can give the dogs the attention they crave.

Both the dog breeds are greedy eaters and enjoy a gourmet meal and snacks all through the day. However, both are predisposed to weight gain, and you should shy away from feeding them too much to avoid weight gain as well as health issues that come alongside.

When it comes to the English bulldog, the excess weight can make moving around difficult. It will also put more strain on their joints and lead to health problems.

For the French bulldog, too much weight can put pressure on their lungs, making breathing difficult. This is why it is important that you take care of their diet and not let those puppy eyes fool you into giving unnecessary snacks.

As they are susceptible to overheating, it is also important that you give them plenty of water – especially during the summertime. You should also take them out for walks in at early morning or late nights when the weather is cooler.

Other possible health issues that affect English bulldog include hip and joint problems and allergies.

For the French bulldog breeds, owners should keep an eye on cherry eye and cataracts.

English bulldog vs. French Bulldog: Which Pet is Right for you?

If you are thinking about adding either a French bulldog or an English bulldog to your family, the end choice comes to your unique preference.

Both dogs are great when it comes to loyalty. They make lovable companions and enjoy socializing with their owners.

But in the end, challenges are there, and you will need to consider each aspect before making a final choice carefully.

Besides these, many other dogs breed out there that you will love and enjoy, so keep looking if purebred doesn’t come to your expectations.

We hope this guide helps you in making a choice you have to. Good luck, and let us know which breed of bulldog you selected for your home.

What To Do If You Don’t Have Pet Insurance

How to Choose the Best Dog Harness