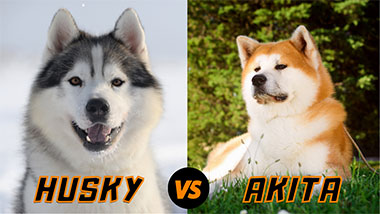 Dogs take up a lot of energy and time, so if you want to buy a dog, you should know all the basic information about him/her. Husky vs. Akita has been a hot debate in the recent past, as both are often the first choices of many people. Grouping these breeds are a smart choice because of their ability to live in a cold climate and thick coats.

They may look very similar, but they are very different from only a few similarities between them. In fact, Akita mixed with Husky is also a great companion as both have working ancestral backgrounds.

In this Husky vs. Akita comparison, we will discuss the history, health, appearance, nature, exercise, and training of both breeds. After reading the article, you will be able to select the right breed for your pet household.

Huskies: They first appeared in Siberia at the beginning of the 17th century. Then the tribes needed sled dogs, as well as hunting assistants. Freight forwarders of the 17th and 18th centuries helped the development of dog breeding.
Soon the Americans also learned about sled dogs, and since 1908 they began to import them to the states from the Far East, where huskies proved to be excellent and became more and more popular with every passing year.Akitas: These dogs have lived in Japan for more than eight thousand years. The ancestors of this breed are the Japanese hunting dogs. In the seventeenth century, there were many hunting dogs, but there were not enough watchmen, so the Akita received new training, in which they proved to be more than successful.
The American military, who was in Japan, took the dogs’ home. Subsequently, the Akita’s American version was introduced, which today remains unrecognized by the Japanese side.

Akitas and Huskies may appear at first glance to be similar but are not. Let’s discuss their appearance and health in details:

Husky: If you need a guard dog, you will have to choose a different breed. It is almost useless to use huskies for protection since they have no aggression towards humans.
Moreover, attempts to unblock this aggression can lead to a disruption in the dog’s psyche, and it can be unsafe for others. The hunting instinct is strong in huskies, but they hunt exclusively for themselves and do not bring prey.Akita: You can use Akita as guards, protectors, and companions. They are very balanced and stingy with emotions; they rarely show joy or sadness; they prefer to be proud and independent.
There is little that can throw them off balance, and only a real threat will make the dog bark. One cannot fail to note huskita exceptional intelligence. Akita has an amazing ability to think and act according to a situation almost on a human level.

The Husky Akita mix training and exercise comparison is another exciting thing. Both breeds need exercise, but Akita is a dominant dog. That’s why it needs less time as compared to Husky.

With regular exercise and outdoor games, your pet will behave like the most affectionate and obedient animal.

The Akita mixed with Husky is eager to serve his master, so he is much easier to train. He tends to learn the commands of the owner quicker as compared to the Husky. Both breeds have equal intelligence, but Husky is a stubborn dog. He is more independent and doesn’t strive to please the master. You need to keep interesting and short training sessions for Husky.

In the Husky vs. Akita comparison, we noticed that they are energetic dogs who will give you many unforgettable memories. So, the selection depends on your needs and requirements.

Everything About Ear Mites and Hot Spots in Dogs

Ethical Methods About How To Keep Cats Away

Unexpected Truth to Know About Why Do Cats Knead?