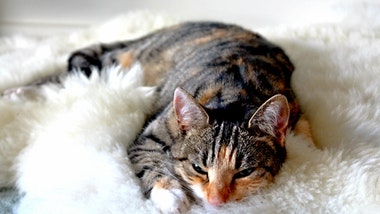 Can Cats Get Down Syndrome?

In humans, Down Syndrome alters the intellectual and physical aspects. It is a genetic disorder people call it down syndrome catfish. However, some cats do show signs similar to those of humans with Down Syndrome, leaving the question, “Can cats get Down Syndrome?”

There is a simple answer to this, no. Technically, it isn’t possible to have a Down Syndrome cat.

The reason is, there are 23 pairs of chromosomes in each cell’s nucleus. The chromosomal defect, Down Syndrome, occurs when chromosome #21 has more copies than it should. This has also led to the nickname of Trisomy 21 for the defect.

check the picture showing what does it look like >>> 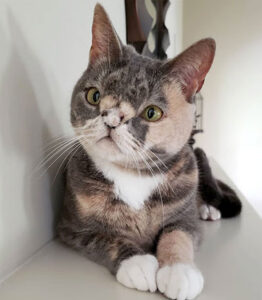 Down Syndrome Cat Symptoms
There isn’t a cat with Down Syndrome. Cats only have 19 chromosome pairs, meaning, no chromosome 21. That is why cats can’t possibly have Down Syndrome. However, there are cases where cats will show similar symptoms to this disorder. These symptoms are caused by different illnesses and genetic disorders. Such symptoms include:

• Problems With The Heart

It is important that you contact your veterinarian if your cat is showing any symptoms that are similar to Down Syndrome in humans.

Causes of “Cats Down Syndrome”
Due to a number of infections, neurological diseases, trauma, toxins, and even genetic disorders, cats can show similar symptoms to that of Down Syndrome. You shouldn’t ignore these abnormalities. A vet will most likely perform a series of x-rays, genetic tests, and other tests to find the root of the symptoms.

Genetic Disorder
There are cats that replicate symptoms to Feline Down Syndrome, even though they can’t have Down Syndrome. This is often caused by different genetic disorders.

An article released by the American Journal of Veterinary Research, published back in 1975, stated there’s a rare chromosomal abnormality in male cats that will produce a disorder similar to the human Klinefelter Syndrome.

It can be a result of other genetic abnormalities such as:

Other Known Causes
If exposed to toxins while pregnant, a cat’s litter can show different changes in facial structure and the neurological system. This kind of damage can also be caused by severe trauma to the face, and head causes permanent neurological and physical issues.

Caring For Cats With Down Syndrome Symptoms
Your veterinarian will determine, after a series of tests and x-rays, what needs your cat has. Sometimes, the disorder can be completely ignored if the cat isn’t in pain. Each cat is different and unique, so it goes without saying that all symptoms should be made aware to the vet.

If the cat needs a special diet or special care, your vet will be able to offer you advice after their diagnosis.

Conclusion
It should be repeated, cats can’t get Down Syndrome. However, they can show very similar signs. So, if you find that your feline friend is showing Down Syndrome Symptoms, then you need to take it to the vet to get checked out.

Always adjust the lifestyle and diet of the cat based on the recommendation of the vet.

Pet Rabbit Lifespan and How to make it longer