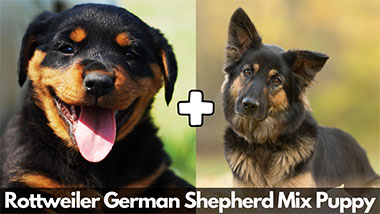 Thousands of years of breeding have created a wide range of distinctive breeds with various colors, coats, physiques, and sizes. But what happens when the two breeds are mixed? You can get an adorable puppy that combines the best of both breeds.

In this article, we will discuss a similar kind of breed, commonly known as Rottweiler German Shepherd Mix Puppy, “Rottie Shepherd,” “Rotten Shepherd,” or “Shottie.

In the middle of the twentieth century, a group of German breeders sets themselves to develop a new breed of service dogs with a stable psyche, good physical characteristics, and a balanced docile character. For breeding work, they involve the best representatives of Rottweilers and German Shepherds. The results were very encouraging: the hybrids had good health, endurance, and the ability to learn quickly.
The puppies successfully gain those traits that breeders sought – strength, intelligence, peacefulness, calm, and obedient disposition. And inspired by the success, breeders introduced the Shepherd Rottweiler Mix Puppy to the German canine community, hoping to achieve official status for them.

A mixture of German Shepherd with Rottweiler is a very successful combination. After all, both breeds have a similar appearance. These are medium-large pets with well-developed muscles, harmoniously folded hind and forelimbs, strong and powerful by nature. The puppy born from a mother of a shepherd dog and a father of a Rottweiler, or vice versa, will be similar to both parents.
Let’s consider the external features that are inherent in Shepherd Rottweiler Mix Puppy:

If we talk about each breed’s character and behavior separately, they also have their characteristics. Rottweilers, for example, are level-headed and calm. They are very confident in themselves and are not afraid of difficulties. They do not have any fears about the world around them. Such animals perfectly protect “their” territory from outside encroachments.

Rottweilers are inherent in some aggressiveness towards other animals and strangers. From the first months of life, a puppy of this breed behaves very independently. Sometimes it is difficult for an inexperienced person to train and re-educate a Rottweiler.
As for German Shepherds, they are slightly different. These dogs are more friendly to everyone. They lead an active lifestyle and quickly learn everything. They are loyal to the person who cares about them.

What is the result of mixing the blood of these two different in nature animals? It is known that Rottweiler German Shepherd Mix Puppies are superior to their parents. They have very high intelligence and quick wit. This breed is very friendly, pleasant, and kind. Moreover, they are very fond of active games, running and jumping, enjoy physical activity, and remain happy during long walks.

In conclusion, we would like to say that Rottweiler German Shepherd Mix Puppy can be a good companion if the owner treats him/her with love and care and pays a lot of attention.

The Ultimate Guide to CBD Oil for Dogs

Ethical Methods About How To Keep Cats Away