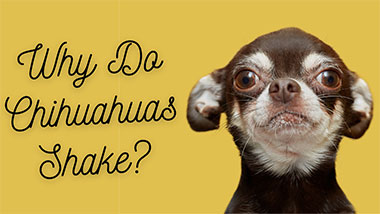 Every dog ​​owner wants his/her pet to be healthy, cheerful, and active. The question, why do Chihuahuas shake, is asked by many owners of decorative dogs.

And the fact that a Chihuahua suddenly begins to shake always worries and even frightens the owners. First of all, they begin to think that since the pet is trembling, it means that he is sick.

In fact, Chihuahuas can shake not only from illness but also from many other reasons. Often, tremor signals the presence of serious diseases, so the owners should carefully monitor the miniature four-legged friend’s condition.

Why Do Chihuahuas Shake And Pant

As practice shows, miniature representatives of the canine world shake more often than their larger counterparts. There are multiple reasons; let’s discuss them in details:

If a Chihuahua shivers outside in cold weather, it means that the pet is frozen. Small dogs get a cold faster than large ones. Due to the imbalance of muscle and fat tissue in the body, Chihuahuas can be more challenging to keep warm. Without the right clothing for the season, a dog can catch a cold and get sick in a few minutes if it is too cold, windy, or rainy outside.

Chihuahuas are generally brave and outgoing, but they are minimal and can easily be intimidated by large dogs, people, or other potential danger sources. Just like a person, a dog acting scared and stress can make Chihuahuas shake!

As a very small breed of dogs, Chihuahuas do not get much energy from food. They have a small stomach and limited nutritional options! Chihuahuas are fed often and little by little. Their meals should be divided into at least three servings throughout the day. Not only will this be the best for the digestive system, but it will also help keep your pets warm.

The Chihuahua’s metabolic rate is significantly higher than that of other dog breeds. That means that they digest food faster and also quickly use up the energy they got from it. Chihuahuas will not effectively maintain normal body temperature if you left without food for several hours!

Often this happens in anticipation of something pleasant. For example, before a beloved owner comes home from work, or when a pet sees in the owner’s hands, a treat that he/she will give the dog.
After the vigorous play, your Chihuahua’s heart rate increases, and it takes time to calm down. The adrenaline released from the body can lead to tremors, which is more common in Chihuahuas than in other breeds.
Sometimes become the dog too excited around strangers, but it is rare to happen.

A pregnant Chihuahua can tremble not only because it becomes more emotional under the influence of hormones, but this can also happen because the pet has started eclampsia – a serious condition caused by a lack of calcium. If untreated, it can lead to the death of the pet. Therefore, in this case, it is necessary to bring the dog to the doctor as soon as possible.

IMPORTANT! Tremors at the end of pregnancy can also be a sign that labor has begun.

In this case, the dog not only shakes but also behaves restlessly, digs bedding, and breathes heavily.

Some illnesses can also cause shakiness in Chihuahuas.

The first and most dangerous ailment for the health and often the life of a pet is hypoglycemia, or, more simply, a lack of sugar in the blood. It is one of the first signs of hypoglycemia in dogs shaking. In Chihuahuas, due to their tiny size, this condition can develop very quickly. In this case, the symptoms depend on the course of the disease and the individual characteristics of the animal. Some dogs may have only weakness and apathy, while others fall into a coma or lethargy with hypoglycemia. With this disease, the dog feels very weak and trembles, but later convulsions begin.

Chihuahuas may start shaking if kidney failure or kidney stones worsens. In this case, you can notice other symptoms, such as:
If you find these symptoms, you need to take the dog to the clinic for examination and diagnosis because elevated kidney levels in dogs are a serious problem.

Due to the accelerated metabolism, the Chihuahuas develop symptoms of poisoning rapidly. Visit the doctor, if you notice sudden shaking accompanied by symptoms such as :

Shivering after your pet has eaten may be one of the signs of an allergy. Itching, watery eyes, and clear nasal discharge may also occur. The dog itches a lot, which is also an indication of an allergic reaction.
If you ignored the problem, then the consequences can be severe, up to anaphylactic shock. If you added new products to the menu, feed them to your pet, one at a time and in small quantities. And after eating, carefully watch how their body reacts to changes in nutrition.

In this article, we have discussed why do chihuahuas shake? And why do Chihuahuas shake and pant? After noticing multiple reasons, we can conclude that shaking in common among Chihuahuas. If the dog is shaking not because of an illness, then you can try to determine the cause of the trembling yourself because it is not dangerous.

Reasons for Spaying and Neutering Dogs (Pros and Cons)

Why Do Dogs Lick? 8 Reasons You Have To Know