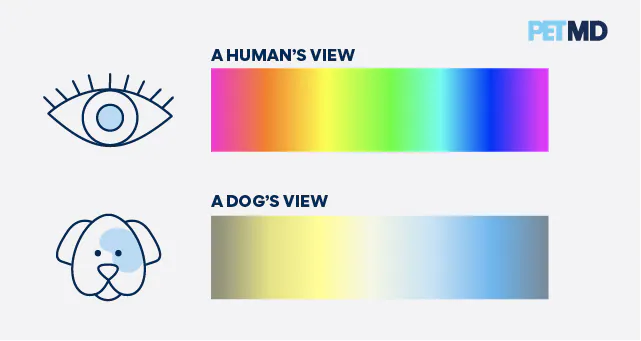 General Structure of the Canine Eye

The Function of Canine Eye

Like other mammals, the function of a canine eye is to see its surroundings. The mechanism of visions involves the reflection of light rays from any object to the cornea. These reflected rays pass through the pupil to the lens and then focus on the retina. The retina converts light energy into electrical signals and transmits them to the brain through the optic nerve.

Dogs were once believed to be color blind, but later researches proved that they could visualize some colors. There are two types of light receptors in the retina of dogs, called rods and cones. The cones help distinguish colors.
Dogs have fewer cone receptors than humans, meaning their ability to distinguish color is limited than humans. Besides, cone receptors present in a dog eye can only detect two colors (dichromat), whereas humans have trichromatic cones. Thus, the ability of dogs to perceive color is limited compared to humans. While nobody exactly knows the exact colors seen by dogs, it is believed the dog’s color world probably consists of yellows, blues, and grays.

Can Dogs See in the Dark?

Compared to the human eye, the canine eye has a bigger lens and a larger corneal surface, enhancing low light visibility. Dogs also possess a reflective tissue beneath their retina called the tapetum lucidum. This tissue also helps them to see in the dark.
The dog’s retina is lined with light receptors called rods and cones. Cones are responsible for distinguishing different colors, while rods enable them to see in dim light. Dogs have a higher number of rods than humans, thus providing them with the capability to see in the dark.

How To Clean Dog Teeth Without Brushing?

Why Leopard Geckos are the Best Lizard for Beginners?