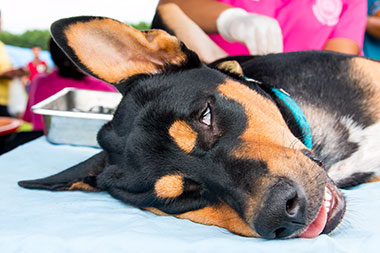 Spaying and neutering involve procedures to “de-sex” your pet. These procedures help reduce and control undesirable sexual behaviors, population, and growth. That also helps reduce the chances of conditions or diseases like pyometra and other infections of the uterus.
Spaying is a surgical procedure for female dogs in which their ovaries and uterus removed, also known as an ovariohysterectomy.

The term neutering (also known as castration or surgical sterilization) is well known in which the surgeon removes the testicles of the dog by surgery. For best results, you should do it around six months of age.

If you are in the situation of deciding whether to spay or neuter your dog or leave it as nature did, the positive and negative aspects will help you to make a decision. Here in this article, we will discuss the pros and cons of spaying and neutering.

No risk of pregnancy

The absence of pregnancy is the main advantage of sterilizing your pet. It helps to avoid pregnancy-related complications. It also reduces the financial burden and stress due to many dog litter on the dog owner. It also reduces space requirements that increase with pregnancy.

Reduces the risks of diseases

Since the ovaries and uterus will be removed in surgery, the concern of developing cancer in those organs will decrease. If this performed surgery before your pet is two years old, this also lowers the chances of getting mammary tumors.

Make your dog cleaner and calmer.

After surgery, your female dog will not be attracted to male dogs and will become calmer. Spayed dogs will not bleed for a long time while in heat. As this discharge stains your belongings like beds, couches, and rugs, spayed dogs are beneficial in this regard as well. These dogs are also more calm, affectionate, and gentle than the others.

As the removed reproductive organs, changes occur in your dog’s hormonal and metabolic structure and can lead to weight gain. We can prevent this weight gain by providing food prescribed by your veterinarian and regular exercise for your sterilized dog.

After surgery, your dog will be spayed so that it cannot get pregnant. As hundreds of unwanted pets are euthanized each year due to overcrowding, this shows that spaying is not bad.

Surgeons use anesthesia to perform sterilization surgery. It is observed that 20% of dogs present complications and adverse effects of anesthesia after surgery.

Aggression, dominance, and sexual desire in male dogs is due to the male hormone known as testosterone. Since testosterone cannot produce after removing the testes through castration, the owner does not have to deal with them. Neutered dogs are kinder, they make fewer mistakes than other dogs, and they rarely mark their territories.

Some diseases can prevent by neutering your dog. Sterilization helps prevent diseases such as testicular cancer, cysts, an enlarged prostate, and other infections.

Thousands of dogs die each year from not receiving proper food, shelter, and care. Overpopulation of this species is now a big problem, so as a responsible person, you will also prefer to castrate dogs.

Will neutering calm a dog?

Yes, but the degree of calm will be relative depending on the dog’s breed and temperament. Anyway, in general, yes, it will be quieter.

After sterilization, the risks of hyperthyroidism also increase. Castration affects hormone levels like thyroid glands. If not cared for properly, it can lead to obesity in your dog.

Bone problem and dementia in dogs

Dog dementia may be occurring in your dog due to neutering. That causes disorientation in your dog so he can behave differently with humans. Neutering at the wrong age can lead to hip dysplasia, bone cancer, and ligament problems.

As with spaying, neutering also requires anesthesia to be administered before the operation. Noticed that one in five dogs develops an adverse reaction to anesthesia. There are only a few cases that can be life-threatening, but most of the adverse effects are minor.

In recent years, animal shelters reported 17 million cats and dogs were released to them. Out of 17 million, only 10 percent of the dogs are the ones that fortunately got a home. Sad to say, the remaining 13.5 had to euthanize.

This problem can be easily solved with spay and neuter surgery. Since performing these surgeries under anesthesia, they are painless. By neutering and spaying pets, we can reduce the population of these unnecessary homeless creatures.

How To Clean Dog Teeth Without Brushing?

What Is the Easiest Pet to Take Care Of