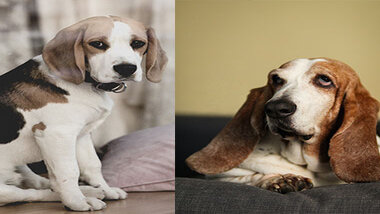 The basset hound and the beagle have many similarities, but they also have differences. Both breeds of dogs are descended from the same parent that is St. Hubert Hound.
If you’re looking for a detailed comparison between the basset hound puppy and the beagle, read this post to the end.
Both dogs have a strong sense of smell and belong to the hound family. In addition to many similarities, they differ in appearance, the Basset Hound puppy has a soft and sad face, but the beagle always has a happy face. 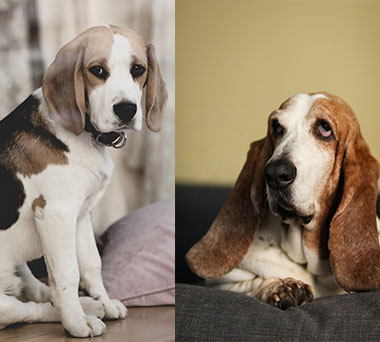 Beagles originated in the 18th century in England and were mainly used for hunting hares. They are known as the best hunting dogs due to their fantastic traceability, sharp nose, and love of hunting.
In the late 19th century, beagles were brought to the United States and are now ranked as the sixth most popular dog by the American Kennel Club.
As mentioned before, Basset Hound and Beagles have the same ancestors (St. Hubert Hounds). Basset hounds are believed to be the result of a genetic mutation. Hunters like that short stature and then breed hounds that have dwarfism to obtain this breed.
Basset hounds basically originated in France and became popular with hunters. They are now ranked as the 39th most popular breed of dog in America by the American Kennel Club.

The Basset Hound and the Beagle are very different in appearance. Basset Hounds are heavier and shorter in stature, but beagles are slightly taller. Basset hound dogs usually have two colors, but beagles have three colors in their fur.
Basset Hounds have large droopy ears, long body with shorter legs. Beagle has a slightly smaller ear than basset hounds and white-tipped tail.

Both dogs belong to the hunting dog family, but they also behave well and can be kept as a pet around the house. Due to their keen sense of smell, they love to chase small animals like hamsters, guinea pigs, rabbits, and sometimes cats, but this problem can be solved if early socialization is done correctly.
Beagles are more vocal but have better endurance and faster pace than Basset Hounds. Both breeds are well suited to children. Both breeds are very independent and stubborn.

The need for exercise for both breeds is different because Basset Hound dogs are medium energy, and beagles are high energy dogs. That’s why basset hounds need 30-minute daily activity, while the beagle needs at least 60-minute daily exercises.
Both breeds cannot walk without leashes because they can be easily distracted by an unusual odor.

Both breeds of dogs are hunting dogs, so they love to chase anything that smells interesting. They are better suited to families and children. The exercise requirement and appearance of both dogs are very different.

Why Is My Cat Drooling? Symptoms, Causes and Diagnosis